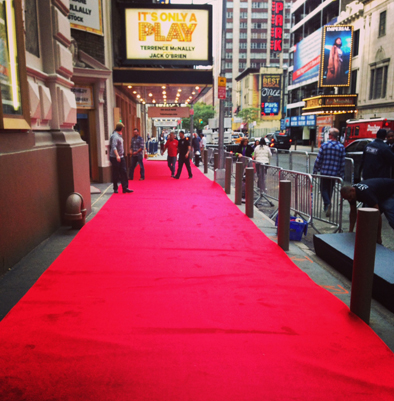 I’ve been to many an opening night and taken hundreds of thousands of photos of step & repeats and A-Listers and curtain calls. Most times, the evenings of champagne and revelry leave me utterly numb. At last night’s opening of It’s Only A Play, though, all I felt was enlivened. Every close of my shutter was like a shot of adrenaline! For every opening, I make it a bit of a tradition to experience the calm before the storm by watching the unrolling of the red carpet. This particular opening was no exception. I got to the Schoenfeld at 5:45 to see 45th Street’s urban dismay transformed into a world of glamour! It was a sight to see, as the carpet reached far down the block – one of the longest I’ve seen. Arrivals went by like a flash, and, after a quick bite at Bond 45, I was backstage, shooting photos of New York City icon, Sarah Jessica Parker.