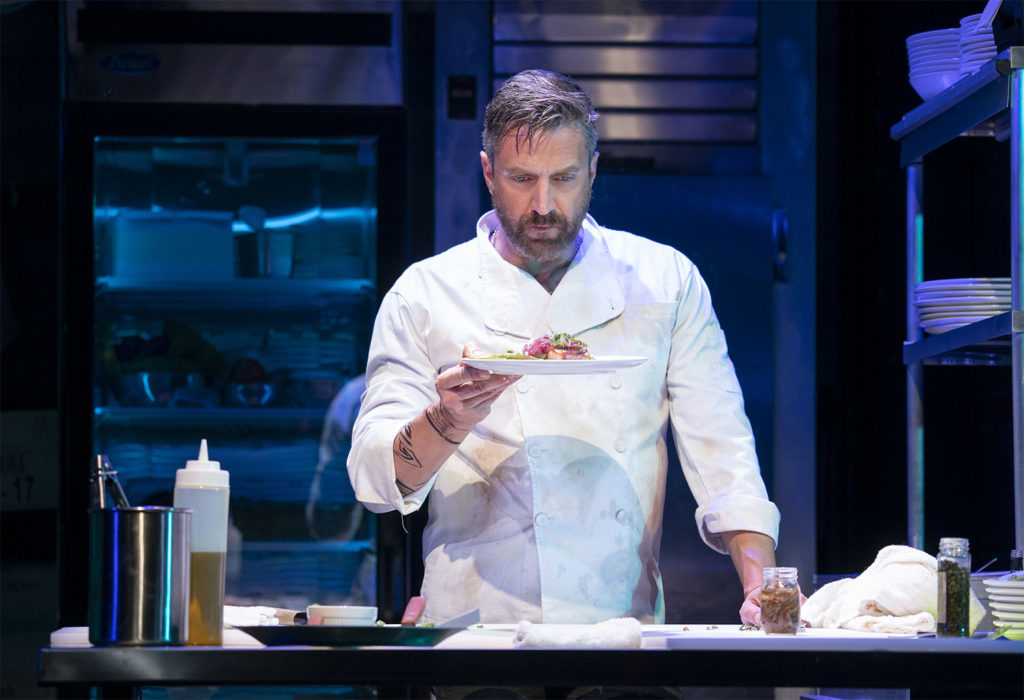 Stage and screen star Raúl Esparza, best known for his role as New York Assistant District Attorney (ADA) Rafael Barba in “Law & Order: Special Victims Unit,” dons an apron and polishes his culinary skills daily in Theresa Rebeck’s new comedy Seared, which opened earlier this week at MCC Theater. The production, which transforms MCC’s Frankel Theater into an actual functioning kitchen, showcases Esparza cooking seven (real!) meals on stage each night, among other things. Join us as the four-time Tony Award® nominee steps out of the kitchen and gives us a taste…On The Couch!

What do you consider to be your best asset?
My curiosity.

What is your favorite drink?
A Macallan’s on the rocks (21 if I’m feeling flush).

What is your favorite condiment?
Mojo (that’s sour orange and lime and garlic and onion and olive oil all mixed together).

What is your current obsession?
Bach. I am a Bach Stan.

If you could give up one of your vices, what would it be?
I already gave up smoking three years ago; I’m not giving up anything else, thank you.

What is the one professional accomplishment you long for most?
A lasting legacy.

What is the one thing you waste too much money on?
Dinners out.

What is the one activity you waste too much time doing?
Answering emails.

What do you consider to be the single greatest threat to your health?
See favorite food answer.

What is the single best trait you inherited or learned from your parents?
Tenacity.

What is the single worst trait you inherited or learned from your parents?
My temper.

What in the world most thrills you?
Surfing in the channel between Maui, Molokai, and Lanai.

What current trend in popular culture most irritates you?
Facebook, Twitter, Instagram, Influencers as a word, Social media anything. And morning shows. And Breaking News chyrons on every damn channel when the news broke 3 days ago.

What was the single most embarrassing moment you’ve ever experienced on the job?
Maybe it was falling flat on my ass during a performance as Che in Evita on the National Tour because my boots had been resoled and I didn’t know it and I slipped and slid all over the plexiglass by Eva’s coffin. Or it could be singing the last ten minutes of Road Show at ENCORES City Center with a massive split up the crotch and back of my pants while wearing white 2Exist briefs. Either way, it involves my ass.

What is your favorite place in the world?
Paris.

What is the most important trait you seek in a romantic partner?
Intelligence. Serious sexual chemistry. They are the same thing.

What would have to happen to make today the best day of your life?
I’d have to be on the beach in Miami and the whole gang of Cubans would be there. We’d all be together again, even the ones who have gone.

What is your personal motto?
Perfection is the death of creation.