After playing Lester Bangs in the record-breaking out of town run of Almost Famous, Rob Colletti is ready for Broadway. Taking on such an iconic role, based on (according to the equally great, Jim DeRogatis), “America’s greatest rock critic” you can see Colletti’s pride in bringing Bangs to life. There’s no question as to whether he does the role justice.

Join us as we speak to him about his guilty pleasures, and whether there’s any place he’d prefer to be than his dogs embrace.

What do you consider to be your best asset?
I honestly am not a big fan of pointing out what I think I do well because I wouldn’t be the artist I am without the people I’ve learned from over the years. So to that end, I’d say the lessons I’ve learned from my educators and the other artists I’ve been fortunate enough to work with in scenes, be directed by, and collaborate with.

What was your proudest moment?
Watching the kids I worked with in School of Rock become the best versions of themselves when they shared their talents with audiences every night. Being a small part of watching them ascend into brilliant young artists and inspiring music fans all over the country brought me more pride than anything else I’ve ever been a part of.

What is your favorite drink?
Arnold Palmers!

What is your favorite food?
It’s hard to pick just one thing because I love all food (especially Italian), but if I had to narrow it down I’d say either Spaghetti Arrabbiata with Meatballs or anything with Fried Chicken and/or Buffalo sauce.

What is your favorite condiment?
Hot Sauce!

What is your current obsession?
I’m a big MCU/Star Wars nerd so Disney+ has been the overarching obsession lately, but most recently I’ve been obsessed with House Of The Dragon and the George R.R. Martin/Game of Thrones lore.

If you could give up one of your vices, what would it be?
I should probably drink less soda…

What is the one professional accomplishment you long for most?
Working with Marty Scorsese or Steven Spielberg. C’mon, fellas! Put me in your pictures!

What is the one thing you waste too much money on?
Bodega sandwiches.

What is the one activity you waste too much time doing?
I feel like I’m not a very wasteful person when it comes to spending time. I can definitely procrastinate, but only if I’m doing something else worthwhile. I am too old to spend time doing anything I don’t find worthwhile.

What do you consider to be the single greatest threat to your health?
The disgraced, de-platformed, twice-impeached former 45th president of the United States, Donald J. Trump.

What’s the single best trait you inherited or learned from your parents?
Empathy.

What current trend in popular culture most irritates you?
Election deniers.

What was the most embarrassing moment you’ve ever experienced on the job?
I once was late for an entrance because I lost track of time backstage.

What is your favorite place in the world?
Theoretically? My dog’s embrace. Geographically? Italy.

What is the most important trait you seek in a romantic partner?
Kindness.

Do you prefer the company of dogs or cats?
I love all animals, but my favorite are Dogs.

What would have to happen to make today the best day of your life?
Win the power ball.

What is your personal motto?
The golden rule. 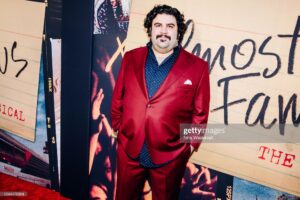