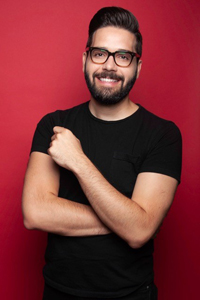 Meet Rob Russo, a writer and theatre critic who covers New York’s performing arts scene at Stage Left, one of the fabulous four hosts of the new Broadway podcast The Fabulous Invalid, and a proud Drama Desk Voting Member. But enough theater business… most excitingly to some, well, certainly to us, is that Mr. Russo began his career in politics and public service, working as a close aide to Secretary Hillary Rodham Clinton through two presidential campaigns, four years at the U.S. Department of State, and in private life (Read this!). He’s a licensed attorney in New York to boot! Okay, back to show biz… a new episode of The Fabulous Invalid drops every Wednesday. Don’t miss it, subscribe on iTunes today. We are fortunate to get a double-dose of Rob this week as we steal him for a minute On The Couch.

What do you consider to be your best asset?
My hair and putting words into sentences. I’m also scary good at knowing what time it is, and building Ikea furniture.

What was your proudest moment?
I’ve got three: 1) passing the New York State bar (that was hard), 2) getting accepted as a member of the Drama Desk, and 3) working on Hillary Clinton’s 2016 presidential campaign (all 20 months—ok, a long moment).

What is your favorite drink?
Ginger Beer. No ice.

What is your favorite food?
I’m obsessed with Indian food.  Favorite dish is probably paneer makhani.

What is your favorite condiment?
I am almost embarrassed by the amount of ketchup I use when eating French fries.  Heinz or bust.

What is your current obsession?
“Babylon Berlin” on Netflix.  Check it out.  (you’re welcome) Also, Hozier’s “Nina Cried Power”.

If you could give up one of your vices, what would it be?
Ice cream.  I get on the wagon often enough to prove to myself that I can do it.  But why do it when there is so much suffering in the world?

What is the one professional accomplishment you long for most?
I’ve wanted to give a Tony Award acceptance speech since I was about 10.

What is the one thing you waste too much money on?
Food.  I gave up on cooking for myself years ago (other people do it so much better), so I pay for just about every meal to be prepared.  In New York, that adds up.

What is the one activity you waste too much time doing?
Not writing.  Or else scrolling through Twitter (which is usually related to not writing).

What do you consider to be the single greatest threat to your health?Climate change. Also, sitting, which is problematic given the amount of time I spend sitting at the theatre!  I’ve had a standing desk for years.  I hate sitting.  It’s the new smoking.

What is the single best trait you inherited or learned from your parents?
An insane compulsion to take on big projects and never be satisfied with giving less than my absolute best.

What is the single worst trait you inherited or learned from your parents?
See above.

What in the world most thrills you?
The moment just before a show starts.  So many possibilities.

What was the single most embarrassing moment you’ve ever experienced on the job?
One time I accidentally disconnected a call between the U.S. Secretary of State and the King of Jordan.  That was pretty mortifying.

What is your favorite place in the world?
New. York. City.  I will die here. Specifically, 45th Street between Broadway and 8th Avenue, about 15 minutes before curtain.

What is the most important trait you seek in a romantic partner?
I’m a sucker for a good smile.

Do you prefer the company of dogs or cats?
Cats.  The 1982 original cast recording.

What would have to happen to make today the best day of your life? Approximately 80,000 votes in three states going the other way in a certain presidential election . . .

What is your personal motto?
Nothing to it but to do it.