Ladies and gents,
When you’re in showbiz you have friends and you have Hollywood friends. Lynda Carter is a friend. I met her in the mid-70’s on the set of Bobbie Jo and the Outlaw. I wasn’t even reporting on the picture; I was trying to get Jesse Vint to date me, before I realized I was barking up the wrong tree. Lynda and I hit it off immediately. We bonded over her Mexican heritage. I’m not, myself, Mexican, but I find the culture divine and I enjoy throwing back tequila shots even more than Liz Smith. I’ve loved her like a sister ever since.

Lynda has done the impossible: have an incredible and iconic early-career success, and then sustain a busy acting career through the subsequent decades. But even though she stayed busy in the 80’s and 90’s and early 2000’s, she seems to have really hit her stride in recent years. Her role on “Supergirl” has introduced her charms to a new generation, and the success of the film reboot of Wonder Women has created a nostalgia for the role that made her famous. Her club act, chock full of pop hits performed as standards, has picked up such a following that it keeps her busy half the year. The other half? Well, look for her in the upcoming Super Troopers sequel.

So isn’t it about time that she had her own star on the Hollywood Walk of Fame? Funny you should ask! She’s getting one this year. And she has asked me to speak at the unveiling!

Last night, I attended the opening night of 1984, and I’m still recovering! A more shocking night on Broadway I haven’t had since, before a performance of Xanadu, I tried plugging my Blackberry into a faulty wall socket at the Helen Hayes Theatre without the supervision of a house electrician and I wound up with second degree burns. Tom Sturridge is giving as intense a physical performance as I’ve ever seen. Olivia Wilde is seductive, naughty, and compelling. Reed Birney will forever haunt my dreams like the faceless lady that haunted his in last season’s The Humans. Of course, the real horror is how much the source material resonates in Trump’s America. So why not take your mind off the current Orwellian nightmare we are all living through by watching the original Orwellian nightmare unfold with some of the best stagecraft you’ll ever see? 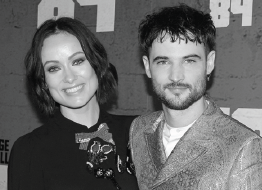