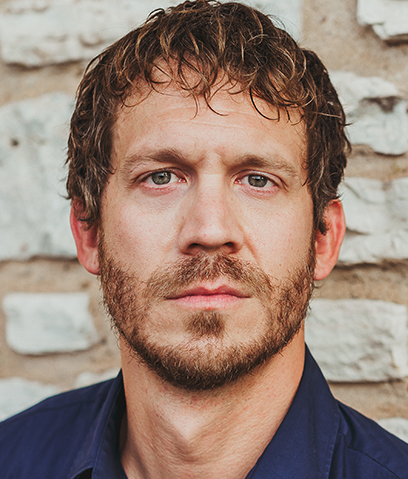 Russell Harvard is a notable deaf actor who can currently be seen playing not one, but two different characters in To Kill a Mockingbird on Broadway. Aaron Sorkin rewrote the script to accommodate Russell! A native Texan, Russell, was inspired to begin acting after seeing a performance of The Wizard of Oz at eight years old. His breakthrough role came when he was cast as Daniel Day Lewis’ son in the Oscar-winning film There Will Be Blood. Harvard made his Broadway debut in Deaf West’s revival production of Spring Awakening. He has also starred in Shakespeare’s King Lear, opposite Glenda Jackson. When he’s not performing on- stage, Russell is often spending quality time with his Australian Labradoodle, Lunar! Please give a warm welcome to Russell, as he joins us on the couch!

What do you consider to be your best asset?
Not dwelling on the bad, so that would mean forgiveness.

What was your proudest moment?
Achieving sobriety.

What is your favorite drink?
GTS Synergy Spring Edition Kombucha! I’m in love with the flavor, elderflower, jasmine and violet. SO GOOD!

What is your favorite food?
Mexican.

What is your favorite condiment?
Salsa.

What is your current obsession?
“Forensic Files” on Netflix. I’m almost done with the whole collection.

If you could give up one of your vices, what would it be?
Eating carbs.

What is the one professional accomplishment you long for most?
Now that I’ve founded a theatre company in Austin, TX, named Deaf Austin Theatre, it would be creating a musical. They just closed a production of Next to Normal.

What is the one thing you waste too much money on?
Cups of cold brew coffee from Starbucks.

What is the one activity you waste too much time doing?
Sleeping. 🙂 Other than sleeping, it would be playing video games on Nintendo Switch.

What do you consider to be the single greatest threat to your health?
Not acting, or inhaling secondhand smoke.

What is the single best trait you inherited or learned from your parents?
How to move forward without holding a grudge.

What is the single worst trait you inherited or learned from your parents?
Addictions.

What in the world most thrills you?
Speed… going rapidly fast.

What current trend in popular culture most irritates you?
Items AS SEEN ON TV.

What was the single most embarrassing moment you’ve ever experienced on the job?
It’s never happened and god forbid it but tooting on stage would be mortifying.

What is your favorite place in the world?
All the secret spots in Austin, Texas. Truly, there’s no place like home but trust me, I love New York City. I cry every time if I have to leave.

What is the most important trait you seek in a romantic partner?
Kindness and balance. I can’t not say only one thing. You notice a pattern.

Do you prefer the company of dogs or cats?
Cat lovers don’t hate me, but I dig dogs.

What would have to happen to make today the best day of your life?
Impeachment of #45 and having the first female president!

What is your personal motto?
“I am.” Kidding, not kidding, kidding. “Thrive, don’t wither.”