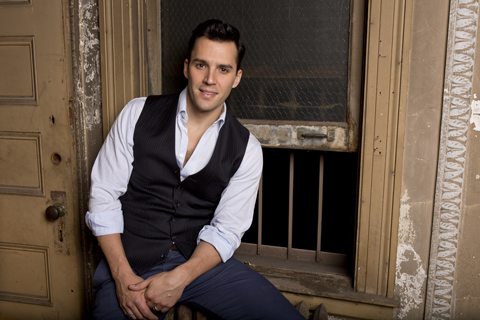 In Broadway’s much-anticipated Side Show, Ryan Silverman more than holds his own on a stage of conjoined twins, reptile men and human pin cushions. Of course, Silverman’s had plenty of experience performing beside curious characters, making his Broadway debut as Raoul in Andrew Lloyd Webber’s The Phantom of the Opera. In addition to this, he has thrilled audiences in various New York theater productions such as Passion, Cry-Baby and The Most Happy Fella. Next Tuesday, we will be able to catch Ryan as Terry Connor in Bill Condon’s masterful reimagining of our favorite musical! For now, we’ll have to settle for The Couch!

What do you consider to be your best asset?
The willingness to make a complete ass of myself.

What was your proudest moment?
The birth of my daughter

What is your favorite drink?
Vodka with Lime

What is your favorite food?
Anything French

What is your favorite condiment?
Ketchup

What is your current obsession?
Sounds cliche but my daughter. I can't wait to get home to play with her.

If you could give up one of your vices, what would it be?
Vodka with lime

What is the one professional accomplishment you long for most?
I'm currently doing it

What is the one thing you waste too much money on?
Vodka…and limes

What is the one activity you waste too much time doing?
Cutting limes

What do you consider to be the single greatest threat to your health?
…

What is the single best trait you inherited or learned from your parents?
To not take myself to seriously or get an ego

What is the single worst trait you inherited or learned from your parents?
I rarely take myself serious enough

What in the world most thrills you?
Singing

What current trend in popular culture most irritates you?
Our obsession with public shaming

What is your favorite place in the world?
Currently, Lake Como Italy.

What is the most important trait you seek in a romantic partner?
Humor and ambition.

Do you prefer the company of dogs or cats?
Dogs

What would have to happen to make today the best day of your life?
To go to sleep and wake up in the morning. Everything's a win after that.

What is your personal motto?
“You miss 100% of the shots you never take”. Wayne Gretzky.