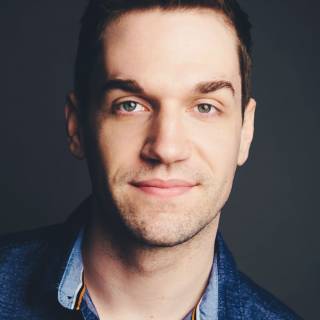 Ryan Vasquez holds the distinction of being the first actor to play all the roles of Alexander Hamilton, Aaron Burr, George Washington, James Madison, and Thomas Jefferson in Hamilton on Broadway or otherwise. Today he can be seen in the hit new off-Broadway musical The Wrong Man where he plays the ominous ‘The Man in Black’ (and alternating with Joshua Henry in the lead role of ‘Duran’ at certain performances). Be sure to catch this incredible talent in the show at MCC Theater, but until then…join us On The Couch!

What do you consider to be your biggest asset?
My sense of humor. I feel like my best self when I’m making the people around me (and myself) laugh.

What was your proudest moment?
I would have to say graduating from college. I went to an all-boys prep school for high school, so when I got to the University of Michigan to study musical theater, I remember feeling really out of place with all of my classmates who had gone to high school where they specifically studied performing arts. Assimilating and working hard to develop and hone skills that I didn’t even have a name for when I got to college, to graduating and feeling ready to move to New York was quite the trip. My mother has worked in education her whole life, so being able to share that with her was especially memorable.

What is your favorite drink?
Ginger ale! I used to only drink it on planes, and now I’m obsessed and I’m convinced it’s healthy. Also, there’s an apple-lemon-ginger-cayenne juice from Pressed Juicery that will make your voice feel anointed that I swear by before shows.

What is your favorite food?
I am not a picky eater, but I will always eat ramen or tacos. Los Tacos Number 1 on 43rd really might be los tacos number one for me.

What is your favorite condiment?
Hot sauce. And real hot sauce, not something you’re just dousing food in to make it edible. Burn your mouth kind.

What is your current obsession?
American history! I even started a Master’s in Political Science while I was a standby at Hamilton to learn more about the Founders and what they intended and how that’s all being applied, and not applied, today. That, and my dog, Lemon. But that’s less of an obsession and more of the most beautiful-faced, sweet pea obligation.

If you could give up one of your vices, what would it be?
Sugar. In fact, this might be the impetus to actually give it up. I cannot resist candy. When I was in Waitress, everyone and their mother was sending us pie and sweets. Do not go into a show about baking where the first words are “sugar” and “butter” if you are not prepared to practice some self-restraint.

What is the one professional accomplishment you long for most?
I want to make a mark on the industry by playing original roles in shows that are reproduced. There’s something very special about creating something that other people will have the opportunity to interpret and embody later on. I’ve started my career as an understudy, playing all sorts of roles that were created by other people so expertly that they allow for growth over time, and I always respect and admire the people who created those things well enough that they can live on through other people. Beauty of theater.

What is the one thing you waste too much money on?
Seamless. This must be every actor’s answer. If it isn’t, send them my way because I need a lesson in self-discipline.

What is the one activity you waste too much time doing?
I wouldn’t say it’s a waste, but I do watch a lot of TV. Easy to justify as an actor (what if I get an audition for this show, I should be familiar with it, and everything else on this network, oh, and this looks interesting, too…), but I try to keep up with the things everyone is watching. It’s a golden age for television right now!

What do you consider to be the single greatest threat to your health?
I’d say the stress associated with the fact that politicians seem to lack the ability to put their lobbying interests aside and pass a comprehensive gun reform bill that over 85% of Americans believe should be enacted. Or the similar inability to recognize that we are well behind the deadline for doing much of anything to counteract climate change caused by huge companies that don’t regulate their carbon emissions. Or a shark attack.

What is the single best trait you inherited or learned from your parents?
Diligence. No one works harder than my mother, who works around the clock to make sure the kids at her school have the education they are due. The work doesn’t finish when you clock out, and I wouldn’t be remotely where I am now without that.

What is the single worst trait you inherited or learned from your parents?
Sometimes, they can be too nice? I don’t know. Tough one.

What current trend in popular culture most irritates you?
Cancel culture. We are getting really out of hand with writing off people’s entire existence and legitimacy because of one tweet. We pile onto people and make them feel small, and it doesn’t change their thinking. It’s not collaborative. It angers them, backs them into a corner, and people who feel the same way put their arms around them and say, “you’re right. Everyone out there is just mean and coming to get you for just about anything you say.” And that’s the environment that allows hate to fester under the radar and then boil over when they feel strong. Let’s not alienate people for being ignorant, that’s not going to make them any less so.

What was the single most embarrassing moment you’ve ever experienced on the job?
I once fell flat on my face playing Fiyero in Wicked on Broadway. Jumped in the air, pinpoint spot on me downstage, and on the way down realized I was completely horizontal. The cast laughed harder than the audience; the audience was just stunned.

What is your favorite place in the world?
The Rockhouse in Negril, Jamaica. If you don’t believe me, look it up.

What is the most important trait you seek in a romantic partner?
Listening. I’ve been with people who listen, but don’t hear you. And I’ve been changed forever by people who just heard me out. That’s what we’re all looking for, no matter how you frame it.

Do you prefer the company of dogs or cats?
Dogs, baby. My little labradoodle is just over a year old and my life has never been the same.

What would have to happen to make today the best day of your life?
It already is. Another day living and breathing is something that someone out there won’t have. That, and if my dog could speak English, because I just want to know what goes on in there so badly.

What is your personal motto?
It’s hard to be a person. I try to remember that when I’m dealing with something tough and judging myself for it, or when I’m dealing with someone I feel like is being unreasonable, or if I’m nervous of what people think of me. You’re only the main character in your own story, no one else cares as much as you do, so just remember that everyone’s out there living their own story as best they can.