Air travel is terrible for the planet and even worse for my complexion, and yet I can’t seem to stay out of the “friendly skies” (or, in the case of the British Airways flight attendant who cut me off after just a small handful of drinks somewhere over the Atlantic, the “cruel and hurtful skies”) these days. Of course, no skin problem or angry stewardess was going to keep me from the opening of Dear Evan Hansen on the West End. I was a personal guest of uber producer Stacey Mindich, who nurtured this show from nascency to smash hit status. She also, let the record show, championed, groomed, and ballyhooed the now-ubiquitous songwriting team of Pasek & Paul years before anyone else had caught on.

Well, as much as I consider myself a true Broadway baby, there is nothing quite like a West End opening. It’s a ritual like none other. And while the Brits usually play down the glitz of such affairs (saving pomp and circumstance for Royal affairs, I suppose) this event bucked the trend. Among the hot shots who turned out were Graham Norton, Andrew Lloyd Webber, Baz Bamigboye (London’s answer to, well, me!), Adam Speers, Bill Hutton, Billy Porter, Naomi Scott, Cameron Mackintosh, Gary Gunas and Bill Rosenfield, Lily James, and the great Tracie Bennett – who can drink me under the table and still manages to age backwards!

Just as vital to the celebration was a coterie of longtime team members who toil behind-the-scenes, like Serino Coyne CEO Matt Upshaw, Situation Interactive’s Jeremy Kraus, and those grapevine gals Molly Barnett (direct from her wedding, which got a lot of ink last week) and Chelsea Nachman (from Twitter).

As for Ms. Mindich, dressed in sparkles from tip to toe — she was the consummate host, providing pre-performances cocktails at an intimate reception, and then more cocktails at intermission in the Blue Room (a little known VIP perch inside the Noël Coward Theatre), and an after party to end all after parties at Whitehall Banqueting House. The party went late, but not late enough for some. I hear Wendy Orshan and Jeff Wilson— legends in their own right — closed down the famed Groucho Club before taking their entire entourage to Claridge’s for “50 quid” margaritas.

It felt like all of London was bathed in Dear Evan Hansen Blue (that’s a proper noun, you see, as it’s an officially registered Pantone hue). Such a citywide takeover is only appropriate for a show that is in the process of worldwide domination, currently touring around North America and about to hit its third anniversary on Broadway – ever spurred by its Tony® win for Best Musical.

The reviews were, of course, rapturous. The critics have bestowed the production with a grand total of 94.5 stars, and counting!

Overheard Maya Rudolph discussing the pros and cons of all-inclusive resorts with a friend over coffee at Sant Ambroise.

Witnessed David Rockwell get honored at Citymeals on Wheels’ Power Lunch for Women, which raised over $1 million for the organization.

Caught John Benjamin Hickey sipping a smoothie outside of the Hudson Theatre, where he is directing Sarah Jessica Parker and Matthew Broderick in Plaza Suite.
As always, a toast of something sparkling to you and yours! 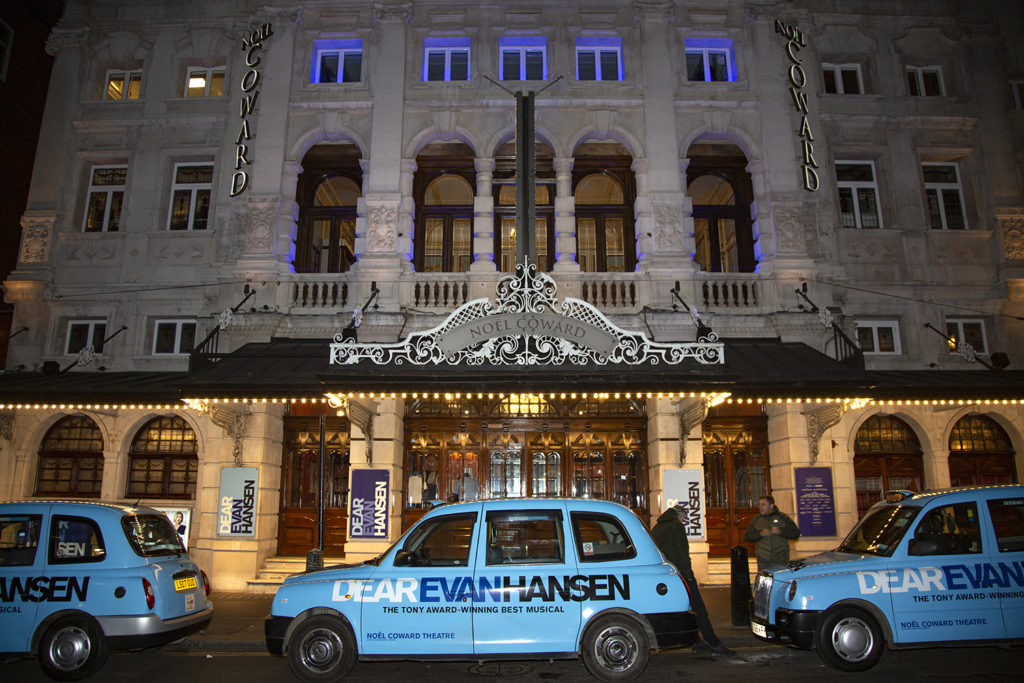