In my day, all the great opening night parties were held at Sardi’s, and all the most glamorous people in the world showed up.  Guest lists were eclectic: you’d have Liz and Dick standing next to a head of state whispering something to an artist who had brought along a poet.  I know I’ve shared an anecdote or two (or a hundred) about such evenings over the years, so I’ll spare you a trip back in time to drive the point home.  Just believe me when I tell you that it was always heaven, if heaven involves standing shoulder to shoulder with a room full of drunk theatricals (and I just know it does).

At the party (Sardi’s, naturally), the plays stars Tyne Daly, Frederick Weller, and Bobby Steggert  mingled with the sparkly crowd — many of whom were still visibly moved from the play when the cast arrived.  Director Sheryl Kaller held court at a table of loved ones.  Even the youngest member of the company, 8-year old Grayson Taylor, stayed up well past his bedtime to revel in the festivities.  But the night belonged to playwright Terrence McNally.  The evening marked the 20th Broadway production for the great chronicler of contemporary gay history.  He has been getting his work produced on Broadway for a staggering 50 years, and has proven himself relevant as ever with this latest piece, which features the first ever legal married gay couple depicted on the Great White Way.

The party was so packed, that three full floors of the restaurant were stuffed with well-dressed bodies.  It went on into the wee hours, and I stayed until last call.  Though I didn’t touch a drop of booze — so many of those fabulous Sardi’s parties have faded from memory over the years, and was determined to hold onto every moment.

Spotted A Gentleman’s Guide to Love and Murder composer Steven Lutvak at JFK with passport in hand. 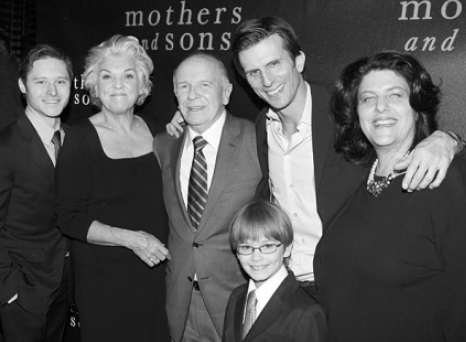