If ever I would meet you, it wouldn’t be on Thursdays. Meeting you on Thursday wouldn’t work at all! First: it’s the most coveted night of the week to open a Broadway show, thanks to the now-quaint theory that prime placement in the Friday Arts section of our hometown paper is a ticket-seller. (Kids, I’m referring to something called “print media.” Feel free to skip ahead.) It’s also a big night for gallery openings, perhaps thanks to the same antiquated tradition. In addition, presumably because hangovers are easier to bear in casual Friday attire, my Thursdays are now also the night when everyone wants to throw cocktail parties.

Take this Thursday past: I started downtown at Crosby Street Hotel, just another jewel in Kit Kemp’s glittering and ever-expanding crown, where the upcoming Broadway production of Company was celebrating Galentine’s Day. It’s not, I quickly learned, a day of romance reserved strictly for lesbians. No, it’s a celebration of (platonic) female friendships, and also a fabulous excuse to get drunk. And, since the eminently sophisticated Stephen Sondheim tuner about bachelorhood in the big city has been utterly reconceived with a female focus, by none other than Marianne Elliott, what better holiday for which to propose a toast? And toast we did and did and did some more, thanks to bottle after bottle of Maker’s Mark, which flowed like the Colorado River of olden times. (Word to the wise: should you ever have multiple events to attend on the same evening, don’t start at the one with a premium liquor sponsor.)

The room was packed with pink and white balloons, along with two giant, 6-foot-tall balloons of the numbers “3” and “5,” in metallic mylar. The significance of that number is that the show revolves around the 35th birthday of its protagonist, Bobbie (née Bobby).

The whole cast was there, with star Katrina Lenk as the center of attention and co-star Patti LuPone as the center of gravity. LuPone gave us all a thrill by starting a sing-along to “Drive a Person Crazy” with castmates Claybourne Elder, Kyle Dean Massey, and Bobby Conte Thornton. (From what I could tell, the cast gets along famously, with no one driving anyone crazy.)

Lenk, wearing a form-fitting hot pink pant suit, also took a turn at some vocals, belting out “Someone Is Waiting” totally undaunted by the prying camera of CBS’ Anthony Mason capturing every moment.

When the last note had been sung and the last drop had been drunk, I scooted uptown to Lotte New York Palace Hotel’s aptly named Champagne Suite. (Word to the wise: if you’ve been chugging bourbon for hours, perhaps steer clear of any room named after another form of booze.) The occasion was Town & Country’s party for Diana: A True Musical Story, celebrating the show’s feature in the magazine’s March issue.

Editor-in-Chief Stellene Volandes delivered a toast that told the tale of how the feature came to be. A freelancer attended the pre-Broadway run at La Jolla and swooned. Senior Editor Adam Rathe caught wind. Volandes gave a green light. The rest is history (or, if you frequent newsstands, the very near future).

Diana’s costume designer, William Ivey Long (who has so many Tonys his mantel requires special engineering), toasted Volandes right back, calling her one of the great “champions for the arts” of our time.

There to celebrate and sip the room’s namesake beverage were the show’s stars Jeanna de Waal, Roe Hartrampf, and Erin Davie, who play Diana, Charles, and Camilla, respectively (and, from what I understand, respectfully), along with most of the ensemble. The cast had just finished their first full run-through at the rehearsal studio, but still managed to get all gussied up for the occasion.

The menu was Diana-inspired, including the offering of her favorite sweet treat: bread pudding.

Of course, it wouldn’t be a properly royal affair without an actual Royal in attendance. So, I was delighted to find myself in the company of Columbus Taylor, son of Lady Helen Taylor who is the daughter of Prince Edward, Duke of Kent. Got that? Good!

Overheard a teenaged Broadway.com superfan hyperventilating and gushing over a beachside run-in with the site’s Editor-in-Chief, Paul Wontorek, on the last day of the Broadway Across America Conference at Baha Mar.

Spotted cosmetics mogul Bobbi Brown breezing through security with nothing more than a chic handbag at LaGuardia. 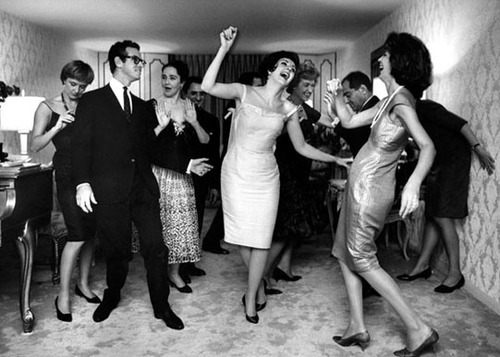