“Stay With Me, Nora”

If you need to find me this weekend, I’ll be stationed at LGA welcoming all my friends from around the country coming into town for the League Spring Road Conference. It’s a time of year when theatre presenters from sea to shining sea come into town to consume massive amounts of theater and alcohol for four straight days. It’s fun.

It’s also the time of year when the season’s Tony nominated shows are pulling out all the stops to grab the attention of voters and theatergoers alike. My favorite attention grabber on the docket for next week? A Doll’s House, Part 2 is holding a midnight performance on Thursday as a fundraiser for The Actors Fund. The show’s a brisk 90 minutes and a ton laughs, so it lends itself well to an adventurous late night crowd. Who says New York nightlife is dead?

Spotted Hello, Dolly! director Jerry Zaks pop into a bagel-and-smear shop on 35th Street, and walk right out after seeing how long the line was.

Caught Oprah Winfrey and Gayle King snapping selfies with their Hello, Dolly! Playbills in the audience at the Shubert Theatre. (They were later spotted at Sunset Boulevard.) 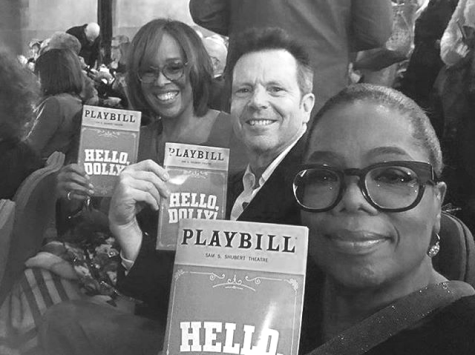