TABLE WITH A VIEW

Gore Vidal used to advise, “never pass up a chance to have sex or appear on television.” Well, I’ve had sex and been on television, and let me tell you a dinner invitation from Carole Shorenstein Hays bests them both! So, when I woke up to an email last week from Carole herself (“SCOOPY— Head Over Heels starting rehearsals next week. Hear the engine revving up — grrrrrr, grrrrr, grrrrr! Little celebration for the cast and creatives at my pad on weds eve …YOU HAVE TO EAT, SO EAT WITH US!“) I didn’t think twice before accepting.

So, there I was — seated across from my pal Cindy Adams, who was next to director Michael Mayer talking about fashion. I thought, “there she goes again, getting all the scoops,” and I decided to forget about trying to out-report the competition and just enjoy the evening.

The shindig was, as Carole indicated in her email, a celebration of the first week of rehearsals for the new Go-Go’s tuner, Head Over Heels. Mayer’s directing, and the show is heading to the Curran before opening on Broadway.

Dinner was sublime, as one would expect, culminating in a giant helping of apple pie a la mode. (Will they have to change that phrase if putting ice cream on pie ever goes out of fashion?)

My evening involved neither sex nor a television appearance, but it was pitch perfect nevertheless.

Caught … Katie Couric sipping tea while tapping away at her iPhone at a communal table at Le Pain Quotidien. 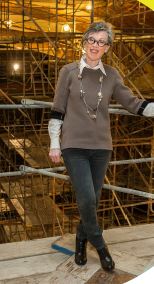