I’ve been hard at work all week trying to find the bottom of a gigantic popcorn tin, but I’m taking a break to communicate the latest and greatest goings-on to you, dear readers. I spent Monday evening rubbing elbows with stars very large and very tiny at the Broadway Dreams Foundation Champagne & Caroling Gala. I was given the prime seat, right next to Katie Holmes. She wore Vivienne Westwood; I didn’t. When the Broadway Dreams performing arts students took the stage to perform, Katie stood on her chair to get a better view. I immediately leapt up on my chair in solidarity, but the sudden change in altitude brought on a massive wave of vertigo. I shifted my weight to keep from falling, and accidently tipped the chair on its two side legs. I overcorrected in the opposite direction, and went flying into table 14 – my head landing right in the lap of Countess LuAnn de Lesseps. Well, lucky for me the audience was so rapt by the pint-sized powerhouses onstage that LuAnn was the only one who seemed to notice my spill, she reacted with such kindness that my ego walked away completely unbruised (I wish I could say the same for my hip).

The next night I was invited to attend the premiere screening of Michael Kantor‘s upcoming PBS special “Broadway Musicals: A Jewish Legacy” at the Jewish Heritage Museum all the way down in Battery Park City. Before we took our seats, I spotted Joel Grey (who narrates the film) and Sheldon Harnick (who is interviewed in it) kibitzing in the lobby. The great Andrew Lippa – another interviewee – was also in the house, as was Judith Resnick, who helped fund the project and remains one of the city’s greatest supporters of the arts. The 90-minute feature explores the impact that Jewish creators have had on the legacy of the Broadway musical. As it turns out there has only been one gentile composer in the history of the American musical, and that gentile was Cole Porter. I’m kidding, of course, but the film really does drive the point home that anyone who is both a musical theater lover and an anti-semite (you know who you are) is woefully misguided. It is a staggering and remarkable legacy that should be honored. I suggest you tune-in on January 1 at 9:30 p.m.

Witnessed J.K. Rowling popping into Tir Na Nog on West 39th Street. “Ms. Rowling, what is a billionaire like you doing at a humble Irish Pub?” “With a question like that, Scoop, I’m guessing you’ve never tried their mozzarella sticks.”

Overheard Michael Caine saying something (I was never good at interpreting cockney).

While this column is generally a place for the lightest of commentary on the lightest of subject matter, I want to close this week by sending love to the children in Connecticut, and around the world, whose innocent eyes have lain witness to the kind of human brutality that even adult eyes should never have to endure. My thoughts are with the victims – those who
perished and those who are left to remember. 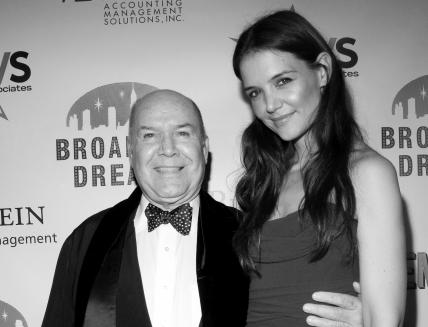