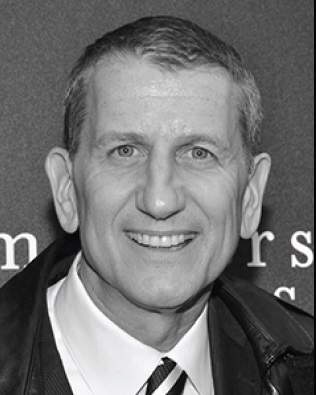 Tom Kirdahy was a public advocate in New York where he provided legal assistance in civil matter to low-income clients, specializing in representing people with HIV or AIDS pro-bono. He met playwright Terrence McNally during the summer of 2001, and quickly became close with him. The couple united in a civil ceremony in Vermont in 2003, and were legally married in April 2010 on the banks of the Potomac. Tyne Daly recited poetry at their wedding, and is currently starring in Terrence's Mothers and Sons on Broadway, which is also being produced by Tom. Find out what his current obsession is as we get him On The Couch!

It's definitely not my nose. I hope it's my sense of humor.

I was named Valedictorian of my college class at NYU and gave the speech at our Baccalaureate ceremony. My entire family was in the audience. I loved making my parents proud. And justifying all the money they'd spent educating me.

Seltzer with lemon lime. I drink tons of it.

Fried calamari. If it's on a menu, I order it.

Making sure that young people see Mothers and Sons.

Why lie? I'd love to be lead producer on a Tony Award winning show.

Sometimes I wish I didn't trust people so immediately.

Sitting in a dark theatre and holding my husband's hand while witnessing something breathtaking on stage. There's nothing like it.

Spelling shortcuts while texting. I just can't warm up to “C u l8er”

Memory is selective so I've probably erased a ton of them from my mind, but I'm an attorney and I do remember spilling coffee on myself and then being called into court at the exact moment it happened. My white shirt was COMPLETELY coffee stained and steam was literally coming out of it. My shirt was half brown and smoke was coming out of it while I was arguing the case and the judge, opposing counsel and all acted as though nothing was happening until finally the court officer said “Mr. Kirdahy, you look uncomfortable, are you okay?” It was so hot I was in agony but I pretended as though I had no idea what he was talking about. We won the case– probably for the sheer brazenness of the behavior.

My first impulse is to say home in front of the fireplace, but I confess if someone said you could be there or in Paris I'd be on a plane in a flash…

That one's easy: a sense of humor.

This one's even easier. Dogs, dogs, dogs. I can't get enough of them.

Misogyny, homophobia and racism would be wiped out.

I have two: “Fight for justice” and “ciao for now.”