“WE GOT THE BEAT”

As these words are now appearing from sea to shining sea, I wish to give a hearty “how do you do?” to all my new readers in the Bay Area and beyond. Welcome to the club!

It has been a long time since a column of mine has been syndicated, so let me give you a little backstory. Last week I got a call, out of the blue, from my old friend from the West, pint sized theatrical impressario and good time gal Carole Shorenstein Hays. She says she needs to know who the “new Herb Caen” is. Well, that’s a tricky question. Herb was the most respected/feared/famous/loved columnist the Bay Area has ever known. There will never be another Herb. But, why, Carole, are you seeking out a gossip monger?

Apparently, she’s looking for a new columnist to cover goings-on for The Curran(t), the hipper-than-thou webzine published out of the Curran theater offices.

Well, Herb and I had something of a friendly rivalry going back to my days at the Herald Examiner, when he was just starting to make a name for himself at the Chronicle and my readership was dropping faster than the price of Bitcoin in 2018. I’d walk over hot coals for Carole, but I wasn’t particularly interested in naming his successor, so I demurred. Well, Carole must have taken the hint, because I got an official offer to publish in the Curran(t) later that evening and thus my column is now officially coastally ambiguous.

It only made sense for my first assignment under this new arrangement to be covering a “huge announcement” at the Curran. So, I booked myself on the first American flight to SFO, hopped off the plane and got straight into a Lyft, and went directly to the Curran. I arrived a few minutes after the appointed start time, and a throng of press types was shoulder-to-shoulder onstage, chattering and sipping Rodney Strong wine (after two glasses I now know why they didn’t name it Rodney Weak).

Carole herself came out to welcome us, and proceeded to announce the details of the Curran’s first-ever full season of programming. And she was, as only Carole could pull off in a setting as grand as the Curran’s stage, flanked by her adoring family and new puppy,

Homer (named for Homer Curran, not the Simpsons patriarch nor he of Iliad and the Odyssey fame).Steve Rubell used to say that the real magic of Studio 54 was “mixing the salad” – his term for creating an eclectic crowd: celebrities dancing with drag queens laughing with models talking to artists drinking with hipsters, etc. Carole brings a similar sensibility to the curation of her programming. With a focus on new shows by significant artists, #Curran2018 (as the season has been dubbed/hashtagged) will feature the pre-Broadway run of Head Over Heels, a brand-new musical utilizing the tunes of The Go-Go’s, Soft Power, a new “play with a musical” written by David Henry Hwang and Jeanine Tesori, and directed by Leigh Silverman, and the latest creation from outré megastar Taylor Mac, Holiday Sauce. The centerpiece of the season, though, is a title you’ve not only heard of but have probably been desperate to score tickets to: Dear Evan Hansen – the reigning Tony Award-winning super smash.

Carole has long preached that she’s all about the artists, and to underscore the point she proceeded to introduce high-wattage talent affiliated with all four productions. California native and American Theatre Wing Chairman, David Henry Hwang, arrived sans posse to represent Soft Power. Members of The Go-Go’s were on hand, along with Head Over Heels producers Donovan Leitch and Christine Russell, choreographer Spencer Liff, and director Michael Mayer. Liff mentioned that he made his stage debut in San Francisco at the age of 7 in the national tour of The Will Rogers Follies. Mayer talked about how much playing the Curran meant to him, personally, as he fell in love with the theater when Spring Awakening played there (pre-renovation). Costume visionary Machine Dazzle was there to represent longtime collaborator/muse Taylor Mac. Never one to disappoint, he showed up in what appeared to be a bedazzled, psychedelic interpretation of a ketchup spill, with the word “GLOP!!” spelled out across it. The mastermind director behind Dear Evan Hansen, Michael Greif appeared via video to introduce a local choir made up entirely of high school students. The choir took over the theater and ended the program with a rousing performance of Dear Evan Hanson’s anthem, “You Will Be Found.” Two things I noticed: 1) there wasn’t a dry eye in the house, 2) the Curran’s incredible acoustics work just as well in reverse!

Before we were all given powder blue Dear Evan Hansen caps (this season’s “it” accessory at first previews) and dismissed into the lobby for more wine and nibbles, we descended upon the house to pick out our favorite seats. It turns out that, because the Curran hasn’t offered a subscription before, subscribers have the chance to pick their exact seat locations (and then hang onto them for years to come). I haven’t seen so many adults elbowing each other out of the way since the Barney’s Warehouse Sale. 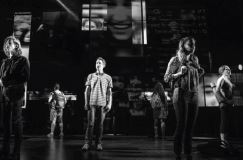