“What Could Be Better”

Do you hear that? Listen carefully, dear readers. That subtle ringing is the death knell to the cynicism that has overtaken popular culture in recent years. Even the New York theater critics, the most hardened bunch of jaded anti socials you’re ever likely to encounter (and these are my friends, mind you) couldn’t help but give it up for the new Steve Martin / Edie Brickell musical, Bright Star, which opened last night at Broadway’s Cort Theatre. Earl Hamner, Jr., creator of TV’s “The Waltons,” passed away yesterday at the age of 92. I consider it either no coincidence, or a major coincidence, that the man who popularized the so-uncool-its-cool, wholesome, warm-and-tingly sensibility that “The Waltons” came to signify for a generation, passed on just as Steve and Edie officially grabbed the baton for a whole new generation. “The Waltons” hit the airwaves in the midst of the Vietnam War, with the echoes of Watergate still reverberating. America needed to be reminded of an essential goodness. And they tuned in, week after week, to get their dose.

Well, is it any surprise that in the midst of this “Politicians Gone Wild” election cycle, when acts of war dominate the headlines and the earth seems to be getting hotter by the second, we once again find ourselves enchanted by a good, old fashioned, heart-on-its-sleeve entertainment? Martin and Brickell, with sublime direction by Walter Bobbie, have not just wrought a beautiful musical, they have created something essential for our moment in time.

The spirit on the red carpet was somewhat dampened by the news of Garry Shandling’s passing, who nobody saw coming. With that many  iconic, funny people in one place, the news was bound to affect the evening. Stern gave many-a-moving tribute to his friend to news crews, ending each one with the “Larry Sanders Show” catchphrase, “Hey now!” But the cathartic and feel-good musical seemed to lift spirits sky high, as the after party at Gotham went deep into the wee hours. Steve Martin played an impromptu set of bluegrass music with the band, and announced from the stage, “We just learned that the New York Times has given Bright Star a rave review!” The cheer that went up was so deafening I actually saw an investor turn down his hearing aid.

Of all the praise for this new wholly original show, perhaps radio icon Joan Hamburg said it best. She turned to a friend, making her way up the aisle after the show, and said with a sense of awe and tenderness in her voice, “It’s Broadway’s most beautiful show.” I, for one, don’t miss cynicism a bit.

Spotted Kathleen Turner waiting for the 1 Train at Franklin Street like a regular straphanger.

Caught Patricia Clarkson walking her dog up Fifth Avenue, chatting with doormen along the way as if the mayor of the Upper East Side. 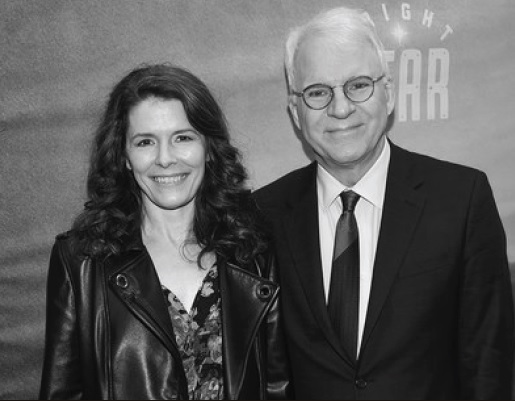