My head is spinning (and throbbing) from the back-to-back-to-back opening nights that this time of year thrusts upon us.

I drank so much champaigne at the opening night of It Shoulda Been You, I spent the next day telling myself, “You shoulda been cut off!”  But let they among us who could have controlled themselves in such a festive and star-studded environment cast the first stone.  Let me list my fellow revelers: Neil Patrick Harris, Kelly Ripa, Mark Consuelos, Judith Light, Tituss Burgess, Rosie O’Donnell, Julianna Margulies, Patricia Clarkson, Cherry Jones, Victor Garber, Bill Irwin, Kenneth Cole, and Charles Busch to name just a few.

Fittingly, the show about a wedding day gone wonderfully awry was a family affair, as the book and lyrics were penned by Brian Hargrove– the real-life husband of its director David Hyde Pierce.  And, of course, producer Daryl Roth presided over the evening as if mother-of-the-bride – she has often described her shows as her “babies.”  I played the part of the embarrassingly drunk cousin.

On the advice of my physician, I am going to take a few days off to dry out.  Immediately following Sunday’s Fun Home opening, I am flying to Palm Springs for a few days of rest and relaxation.  I return to NYC on Thursday, just in time for the final opening of the season: The Visit.

I haven’t been to Palm Springs since 2005, when I stayed with at my dear friend’s Carol Channing’s pad while she was in New York visiting Tommy Tune.  Carol’s home might be the most charming place on the planet.  There’s an Al Hirschfield illustration hanging on just about every wall, with additional theatrical keepsakes displayed in the dining room’s glass front cabinets.  Over the dining room hangs a dramatic glass chandelier by Dale Chihuly.  I wasn’t able to make such glorious arrangements on short notice, so I’ll be staying at The Parker this time around.  But Carol said I can borrow a Hirschfeld to hang on the wall.

Caught Aubrey Reuben, the famed photography with the tiny camera, flirting shamelessly with designer Rachel Antonoff at a preview performance of Something Rotten.

Saw Tina Fey at an old-fashioned photo development store on the Upper West Side.  “Are you still using film, Tina?” I asked.  She just looked at me funny. 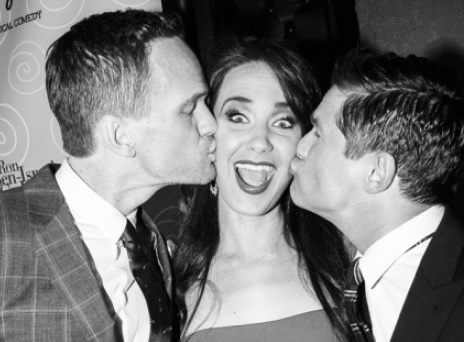