Well, I landed back in the hospital this week with what my physician is calling the nastiest case of Tony fever he’s ever come across. Can you blame me? What a season it has been! That the field had to be narrowed down to just four or five in each category is heartbreaking. That there can only be one winner is downright criminal!

I attended the annual Meet the Nominees press reception at the Paramount Hotel, where I spilled Fiji water all over my IBM laptop after getting loaded on La Crema Chardonnay and hitting on a Carnegie Mellon student. But enough about our sponsors, let’s talk about the nominees!

Amping up the morning’s star power were Blackbird’s Jeff Daniels and Michelle Williams, Long Day’s Journey’s Jessica Lange, as well as the Oscar-winning powerhouse and star of Eclipsed Lupita Nyong’o, who commands the attention of every room she’s in. Tony veteran Joe Mantello, who directed The Humans, remained glued to first timer Stephen Karam, who wrote it. Reed Birney, who stars in it, stayed glued to Jayne Houdyshell, who also does. Family onstage, family offstage, I guess. Speaking of tightknit groupings, Ms. Cusack stuck with Bright Star creators Mr. Martin and Edie Brickell, making for a tight squeeze in some of the Paramount Hotel’s more intimate rooms. And Shuffle Along’s mad genius collaborators George C. Wolfe and Savion Glover also worked the event side-by-side. They say theater is the most collaborative of art forms, and apparently this extends to the promotion of it!

Witness Meryl Streep laughing her face off at The Humans, before jumping to her feet at the very top of the curtain call, before the rest of the audience quickly followed suit.

Overheard Joel Grey telling a photographer that his favorite show of the year is Bright Star.

Spotted Tony Shalhoub and Fred Willard at The Effect.

And finally, to put things in perspective to everyone salivating over a piece of metal, a hearty and heartfelt congratulations to producer John Johnson and his wife Kristen, who just welcomed a baby boy, John “Jack” Fredrick Johnson V, into the world. If he’s anything like his parents, or his big sister Zoe for that matter, the world is a better place with him in it. 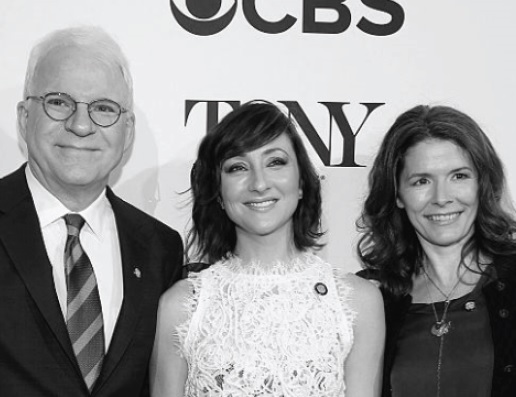