“Why Are We All the D’ysquith’S Dying”

When you attend as many Broadway openings as I do, it’s easy to get a tad jaded. Don’t get me wrong: I love an opening night, but so many tend to take place in the same venues with the same trappings and the same guests. But every once in a while, along comes an opening that truly surprises. A Gentleman’s Guide to Love and Murder was not just memorable for the quality of the show (you’ve read the raves) or the starry guest list (you’ve seen the photo coverage), but for the producer’s commitment to old school glamour. (I’m told that the industry shorthand for the mouthful of a title is “GGLAM,” so it should have been no surprise that a touch of GGLAMOUR was the order of the day.) The dress code was strictly black tie (even the media covering red carpet arrivals turned out in tuxedos and, in some cases, top hats). The vibe was Edwardian England. The red carpet featured someone announcing the VIPs, in a pitch perfect upper crust accent, as they approached the throng of photographers. You should have seen the look on Nathan Lane’s face as “LORDNATHAN LANE” was shouted out at full volume.

The first night crowd ate up the show, and during the extended and deafening ovation stars Jefferson Mays and Bryce Pinkham passed out bouquets to each of their female cast mates.

But it wasn’t until I arrived at the party that the full effect of the evening hit me. The venue was The Pierre Hotel, and a more luxe setting for a Broadway party I can’t recall. The bash took up not one but two giant ballrooms, and the string of anterooms in between. I saw Kathleen Turner chatting with friends as David Hyde Pierce congratulated the producers (producer Joey Parnes also triumphantly shepherded last season’s Vanya and Sonia and Masha and Spike, starring Pierce, to Broadway) as Betsy Brandt admired her surroundings in a haut couture gown. As word of the rave reviews spread like wildfire, director Darko Tresjnak, creators Steven Lutvak and Robert Freedman, and the cast accept congratulations from guests like Tony Roberts, Terrence McNally, Kate Baldwin, Laura Benanti, Bobby Steggert, Walter Bobbie, Ryan Eggold, Katie Finneran, Alison Fraser, Marin Ireland, Judith Ivey, Dominic Fumusa, Caissie Levy, Patrick Page, Julia Murney, Alex Timbers and Marge Champion. Jackie Hoffman enthused to her nattily dressed date, “I love this show! It managed to be old fashioned and edgy at the same time.” And when Ms. Hoffman says you’re edgy, you’re edgy!
(Jackie’s own brand of edge — not for the faint of heart — will be on full display at Joe’s Pub in December when she unveils her new show, Heeb for the Holidays.)

Overheard… Sarah Silverman complaining about having to come up with “all new material” after her HBO special airs on Saturday. 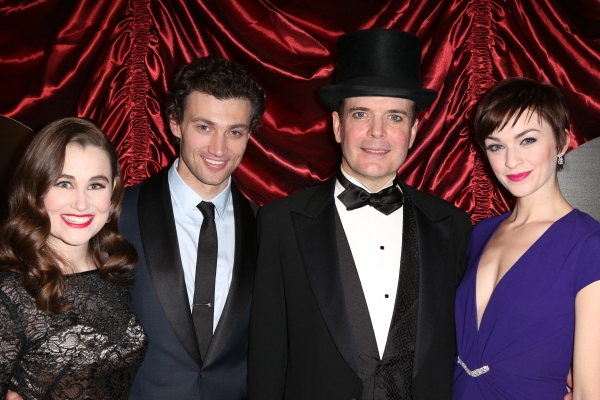