Anyone who tells you Manhattan is dead in August hasn’t seen my date book!

Last Tuesday I attended the opening night of Primary Stages’ latest hit, Secrets of the Trade. The house was brimming with energy (and the likes of Daniel Beaty, Chris Sarandon, Joanna Gleason, Charles Busch, David Cromer, Elizabeth Wilson, A.R. Gurney, Peter Friedman, Kevin Spirtas, Blair Brown, and lots of mature First Nighters). Jonathan Tolins looked positively thrilled (a happy playwright?!) at the after-party at Sarabeth’s. Stars Jonathan Glover and Noah Robbins got a fabulous ovation upon their arrival. Harry Haun was on hand taking notes, and told me the sliders were not-to-be-missed, and so I indulged. If you speak to my nutritionist, blame Harry Haun!

I wasn’t able to score a seat to the opening night of Off-Broadway’s Abraham Lincoln’s Big, Gay Dance Party, but I did manage to get into the post-performance gala at a teensy-weensy midtown homosexual haunt called Bar-tini. It’s a hole-in-the-wall to be sure, but the chicest hole-in-the-way this side of 9th Avenue! When I arrived, the bash was spilling out onto the streets. Inside, it was shoulder-to-shoulder and at least 120°, but the champagne was flowing and no one seemed to mind. I took a seat near the press line (naturally), where it seemed everyone was clamoring to talk to Playwright Aaron Loeb. I would have stayed all night, but the heat finally got to me and I had to scoot out, but not before giving my old buddy Aubrey Reuben a bear hug.

Over the weekend I headed up to Ogunquit, Maine for some R&R. It was heaven and the weather was picture perfect. The highlight was getting to see Stefanie Powers’ star turn in Sunset Boulevard. Stef and I go way back to her “Hart to Hart” days, and I still consider her one of the most underappreciated actresses of her generation. Watching her command the stage as Norma Desmond reminded me just how brilliant she is. I had a similar feeling in my stomach a few years back when I saw the great Joyce DeWitt triumph as Mamma Rose at the Bucks County Playhouse. After the show, Stef took me to a local piano bar called The Front Porch, where we were entertained by an endless stream of amateur crooners (“I love coming here after a show and letting everyone else do the singing,” she quipped.) I was brought to tears by one young man’s particularly troubling interpretation of that rousing anthem, “I Am What I Am.”

Tidbits From Around Town

Spotted Colin Quinn eating a muffuletta sandwich whilst waiting for the 6 train.

Witnessed Carol Alt playing Paddycake with a little person on Bleecker Street, while a group of foreign tourists snapped photos.

And, finally, I must bid adieu to a great lady and a great friend: Patricia Neal. I’m not sure we will ever know a star as graceful, and she will be sorely missed. American Theatre Wing’s Executive Director Howard Sherman reminded me recently that she was the very first Tony®-winner. My beloved pen-pal, Beth DuMont, told me the most charming story about an afternoon they shared together. I’ll transcribe it here in tribute:

“We had ‘tea’ (well, she called it tea) in Edgartown two years ago and she was wonderful. She asked me when my birthday was and I said, ‘Are you into astrology?’ She said, ‘Hell no, but I like you and I might just send you a card.’” 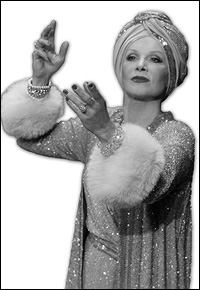