I have developed, for the first time in my adult life, a crush on a woman. I’m as shocked as you are. Who is this unlikely object of my affection, you ask? The divine creature known as Carey Mulligan, currently starring in Skylight. I attended opening last night and spent the better part of the after party trying to get close enough to encounter this rare beauty, but not so close as to scare her off. It was like being on safari in cocktail attire. You’ve already read the raves, so I won’t bother waxing poetic on the virtues of the production. But I can’t resist shouting my love of Ms. Mulligan from my metaphorical rooftop. She is giving one of the most delicate, layered, and ego-less performances of the year. Carey, if you’re reading this, call me. (PS: the only thing less likely than me falling for a female is Anna Wintour taking in a show sans her trademark sunglasses. Well, last night was miraculous on both counts, as I spotted the great editrix circulating the Bowery Hotel after party completely shade-less.)

Chita Rivera is to Broadway performers what Freud is to your average $300/hour shrink. They’ve studied her. They revere her. They wish they’d done it first. So it should come as no surprise that Broadway’s elite have been flocking to the Lyceum Theatre to catch her in The Visit and pay her their respects. I spotted two of our communities most iconic stars the night I went: Harvey Fierstein and Nathan Lane. I hear the house seat book reads like Bar Centrale’s reservation list.

Speaking of Broadway legends, Tommy Tune is getting a Lifetime Achievement Award from the Tonys this year. The man already has nine statues on his mantle (and in more categories than anyone in history), so this will make it an even 10. I sure hope he plans to stay up late on Tony night as I hear big plans are underway to make sure Tommy feels extra special at the Carlyle Hotel after the telecast.

One of the questions I get most frequently is where to dine pre- or post-theater. So here, in no particular order, are some of my favorites: Joe Allen, Orso, Sardi’s (especially if you’re an actor and can order off the discounted Actor’s Menu), Lamb’s Club, Sushi Zen, Inakaya, Staghorn, Gallagher’s, Mastro’s, and Toloache.

Spotted Lucy Liu at a recent performance of Hand To God.

Caught Anne Hathaway sneaking into Josephine and I at the Public Theater just after the house lights went down.

And, finally, to the hardworking company of Honeymoon in Vegas, shows come and go, but talent is forever. We’ll see you soon, I’m sure. 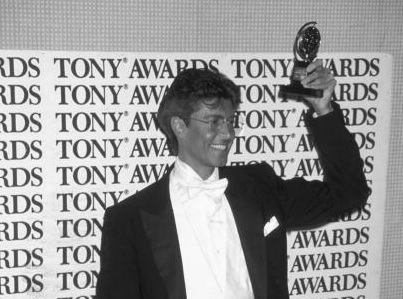