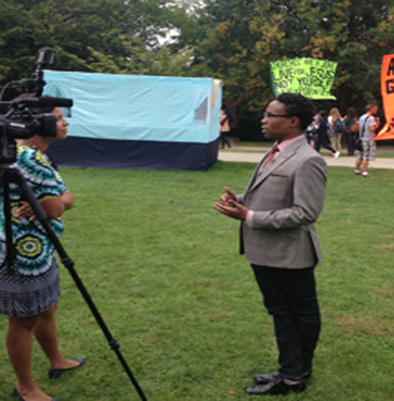 Happy Billy Porter Day! This Tuesday, the powers that be in Pittsburgh, Philadelphia announced that every October 1st would be dedicated to the Tony-Award Winning star and entertainer extraordinaire. Porter’s trip was chock-full of appearances, interviews and quality time with loyal fans. In this photo, the stylish Porter talks with the media about his holiday, his extensive experience on the New York stage, and the joys of playing Lola and singing the songs of the great Cyndi Lauper. A source tells us that the religious protestors behind Porter (whose demonstration was mere coincidence) all saw Kinky Boots and “absolutely loved it.”