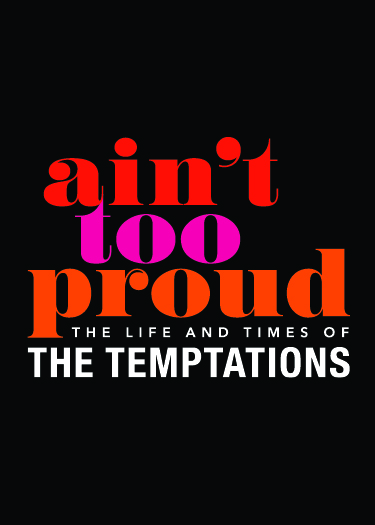 Ain’t Too Proud — The Life and Times of The Temptations

Ain’t Too Proud – The Life and Times of The Temptations is the electrifying, hit new musical bringing the incredible true story of the greatest R&B group of all time to Broadway’s legendary Imperial Theatre. Winner of the 2019 Tony Award® for Best Choreography (Sergio Trujillo), Ain’t Too Proud follows The Temptations’ extraordinary journey from the streets of Detroit to the Rock & Roll Hall of Fame. With their signature dance moves and silky-smooth harmonies, they rose to the top of the charts creating an amazing 42 Top Ten Hits with 14 reaching number one. The rest is history — how they met, the groundbreaking heights they hit, and how personal and political conflicts threatened to tear the group apart as the nation fell into civil unrest. This thrilling story of brotherhood, family, loyalty, and betrayal is set to the beat of the group’s treasured hits, including “My Girl,” “Just My Imagination,” “Get Ready,” “Papa Was a Rolling Stone,” and so many more.

With a book by Kennedy Prize-winning playwright Dominique Morisseau, Ain’t Too Proud features an iconic score made up of The Temptations’ legendary songs. Two-time Tony Award winner Des McAnuff directs, with choreography by Tony and Olivier Award winner Sergio Trujillo.

The first national tour of Ain’t Too Proud will launch at the Durham Performing Arts Center in Durham, North Carolina, in December 2021, before going on to play more than 20 cities coast-to-coast for 35 touring weeks, including a homecoming to The Temptations’ roots in Detroit, and a triumphant return to the John F. Kennedy Center for the Performing Arts in Washington, DC.