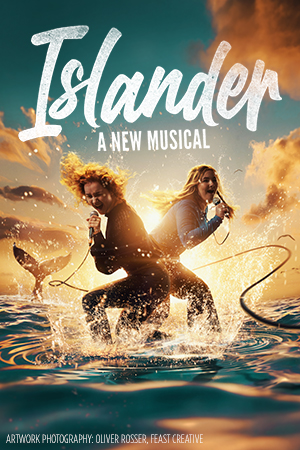 Acclaimed and award-winning UK musical, Islander, comes to Off-Broadway’s newest theatre, PLAYHOUSE 46 at St. Luke’s. Islander debuted at the Edinburgh Fringe Festival in 2019 and received unanimous critical acclaim. It then transferred to London and now comes to the U.S. with the show’s original two-hander cast, Kirsty Findlay (Olivier Award nominated) and Bethany Tennick (The Stage nominee for Best Performer in a Musical).

Islander will be the first production to play in the newly designed PLAYHOUSE 46 at St Luke’s. The theatre has been renovated and is a bright new off-Broadway gem in the middle of the Broadway/Times Square area with location right on 46th Street’s Restaurant Row.

There is a girl. She stares out to sea and dreams of a new life beyond her lonely island. Myth and reality collide when the tide washes a mysterious stranger onto her beach. Findlay and Tennick create a world of characters while live-mixing and layering their voices, harnessing looping technology to create an astonishing soundscape.